What do Babies' Understand? 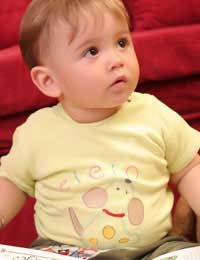 Newborn babies operate on pure instinct knowing only their needs for nourishment and human connection. It doesn't take long, however, for babies to develop a sense of the world around them as they begin to increase their knowledge and understanding in a number of areas.

The life of a newborn is pretty simple. They sleep a great deal of their day, often up to 16 hours, waking only periodically for feedings. During their waking hours, newborn babies tend to focus on sounds and lights, reacting physically to external stimuli. Babies also seem to have an understanding of the close bond that they share with their mothers, favouring a close, skin to skin connection when they are being held. In the very beginning, parents should be attentive to their infant's needs, responding quickly to cries of hunger and spending plenty of time snuggling their baby, giving her the sense that she is loved, safe, and secure.

Dr. T. Berry Brazelton, distinguished expert in baby development and baby health, developed an evaluation tool called the Neonatal Behavioural Assessment Scale (NBAS) which is used worldwide "to assess not only the neurological and physical responses of newborns but also their emotional well-being and individual differences." Use of this system commonly referred to as "The Brazelton," can be used on infants newborn through two months of age and helps clinicians to instruct new parents as to the specific characteristics displayed by their baby, facilitating the parents' ability to understand their baby's needs. The Scale considers 28 behavioural and 18 reflex items and helps to assess baby's capabilities across different developmental areas. A basic profile of the baby is then generated, giving parents a picture of the best ways to sooth, comfort, and stimulate their individual child.

Babies come into this world without knowledge or expectations of what they will find (talk about a trip to the unknown!), but before long, their brains process a wide variety of input, allowing them to learn and remember new things every day. While every baby's cognitive development advances at their own rate, the first 12 months of life follow a somewhat predictable pattern.

One to two Months
During their first two months, babies show interest in new objects, turning their heads toward them and staring, seemingly studying the toys or faces.

Three to Four Months
Parents of three to four month old babies are provided with evidence that their little one is learning as the baby often shows signs that they have anticipatory responses to familiar stimuli. For instance, a four month old may kick and show excitement when they are placed in their buggies, looking forward to a pleasant walk.

Four to Six Months
As their visual acuity increases, babies are able to utilise their sense of sight along with their already keen senses of taste, feel, and hearing. This sensory integration allows babies to form a more complete picture of familiar and newly introduced objects. Parents often note that babies of this age show a fascination with their fingers and toes, wiggling them, staring intently, and even nibbling on them.

Six to Nine Months
One of the biggest advancements typical to this time frame is the development of object permanence. This important cognitive development means that babies understand that objects and people exist, even when they cannot actually see them.

Nine to Twelve Months
During the last quarter of their first year, babies begin to imitate the sounds and actions of others, showing a big advancement in their ability to think and reason. Also now fairly mobile, curious babies tend to enjoy exploration of their environment.

The cognitive differences between newborn babies and those who have reached their first birthdays are enormous. By the time that they have covered themselves in celebratory cake for the very first time, babies have the ability to differentiate strangers from familiar faces, wave bye-bye, drink from a cup, express their opinions (clearly!), and they often have a small vocabulary of understandable words. Parents of one-year-olds are understandably proud -- just who is that bright, beautiful baby and where did that helpless newborn go?