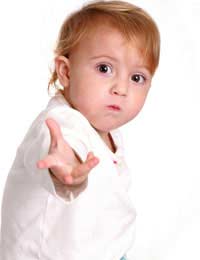 When they are very young babies don't give it a second thought when their mum and dad walk away from them. By five or six months old, though, babies will often fuss and cry when their parents attempt to leave them, believing that they have disappeared. It can take a few more months for them to understand that while they may not be able to see their mum, she still exists. This ability is called object permanence.

Mastering the concept of object permanence is a major milestone in a baby's life. The term was first coined by famed child psychologist Jean Piaget, who studied infants' responses to a toy appearing and then being removed from a child's line of sight. In his simple but effective research, Piaget would show a baby a toy and then place it under a blanket. Babies who had a clear concept of object permanence would grab at the blanket, trying to uncover the toy while babies who had not yet reached that milestone might be upset because the toy was gone. Piaget found that most babies seemed to have an understanding of object permanence at about 8-9 months of age, during the Sensory Motor Stage of Cognitive Development, but as all babies vary, so does the age when they reach this particular milestone.

At about the time that babies come to understand the concept of object permanency, they are prone to their very first bouts of separation anxiety. This is completely logical since in the past, when mum left, baby simply "forgot" about her until she returned. Once baby realises that mum still exists, but is simply away, it is understandable that the baby would object (often loudly!), demanding that mum returns to play.

Parents and other caregivers can help their babies ease through this separation anxiety by moving from the baby's line of sight and then peeking back around the corner, assuring the baby that they are still nearby. In order to be able to leave without causing the baby excessive distress, parents may want to play this appear-disappear-reappear game frequently, each time increasing the time that it takes to reappear by just a little. With time, babies will relax, knowing that their parents will be returning soon.

Babies learn through playful interaction, so parents need not worry too much about trying to "teach" their infants to understand object permanence. Games of peek-a-boo are fun for babies and parents often enjoy them just as much, expressing delight every time that their baby squeals at the reappearance of mum or dad. Such games are precursors to object permanence, so parents, while playing and having fun, are helping their little ones along at the same time.

Babies grow and develop at their own pace, with even twins reaching developmental milestones at differing ages. As experienced parents will confirm, most of the worrying that parents (especially first-timers) do is completely unwarranted. Parents should simply play actively with their babies and enjoy every precious moment. One thing is certain; babies tend to grow up far too fast, so smart parents will take the time to relax and enjoy all of those simple baby games without giving too much thought to where their baby ranks on their achievement of developmental milestones.