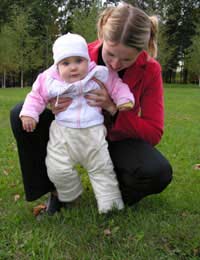 Most parents remember their child’s first steps for the rest of their lives but that doesn’t mean that there should be any pressure surrounding this developmental milestone. Instead, parents should delight with their children as they take their first few steps out of infancy and into childhood, and celebrate when their children develop their skills on their own timetable.

Children generally learn to walk anywhere between seven and sixteen months of age. Before a baby will walk, however, (s)he will likely engage in some pre-walking behaviours such as pushing up from the floor, rocking on his/her stomach, pulling up into a sitting position, scooting on his/her bum and crawling on all fours. Crawling in itself is a milestone, but some children start out by crawling either by using the arms and legs on the same side or by moving both legs and then both arms. This is entirely natural, and children usually progress to crawling with opposite arms and opposite legs all on their own. Many children also engage in aided walking before walking on their own, such as pulling themselves up and walking while grasping the edge of a table, or walking while balancing with the help of a parent.

Very few children learn to walk and do so with a completely natural, smooth gait. Instead, most children exhibit a wide variety of walking styles after taking their first steps including waddling, bowleggedness, and toe walking.

Waddling, or a walk in which the toes point in, may well be due to a child’s natural twist in the foot, ankle or leg. Parents should not become overly concerned about waddling, though they should remind their children to point their feet “out” (which usually self-corrects into feet pointing straight ahead) and may want to physically position their children’s feet on occasion so that the children themselves understand what the right position feels like.

Bowleggedness, or the tendency for a child’s legs to bow out, often corrects itself naturally by the age of three at which point the child may become “knock kneed” or exhibit an inward tilt of the legs. Both of these conditions tend to be outgrown by the age of five, though asking for a GP’s opinion will never hurt.

Finally, many children walk on their toes when they first learn to walk. Most children outgrow this behaviour by about eighteen months of age, and having children wear full shoes (as opposed to sandals) may help speed the process.

It’s often said that when children learn to walk parents forget how to sit. This may well be true in the sense that as children develop their independence (and speed!) it takes a lot more energy for parents to look after them. Adequately safety proofing the house will go a long way towards keeping them safe, including:A child’s first steps are a joy for any parent to behold, but they should not be forced on a child by inpatient parents. Instead, parents should enjoy their child’s development and delight with their child when developmental milestones such as first steps are attained.
Next Page