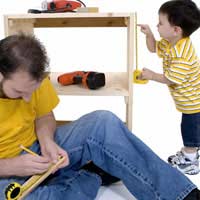 Spatial awareness is an organised knowledge of objects including oneself, in a given space. Spatial awareness also involves understanding the relationships of these objects when there is a change of position. Obviously this is complex mental skill, one that children must hone from a young age. Spatial awareness should come naturally to most children, though there is much that parents can do to promote special awareness.

Spatial awareness is usually defined to include a person, so that for a child to have spatial awareness, that child will understand his/her location and the location of objects in relation to his/her body. In understanding these relationships, children come to learn concepts such as direction, distance and location. For example, a child with spatial awareness will understand that as (s)he walks towards a football, the football is becoming closer to his/her own body. Children tend to naturally develop a sense of spatial awareness, as parents will often observe. At a most basic level, parents can watch infants throw their arms wide even when they are being held by someone. As the child grows, his/her arm movements will likely become more restrained when (s)he knows that others are close by.

The key to promoting spatial awareness in children is to allow them to explore their surroundings. As children become more mobile, they are able to crawl and later walk to objects and gain for themselves an understanding of how many steps it takes them to reach a given object or a given location. When children are able to move themselves they will also come to understand how their location to objects changes as they move. However, there are still a number of ways that parents can help promote spatial awareness in young children, including:

Children who do not naturally develop spatial awareness may have a physical or learning disability that is precluding this development. For example, Asperger’s Syndrome and Dyspraxia both often manifest a lack of spatial awareness. Sometimes this can be seen in children who appear clumsy, can not follow instructions or directions and can not tell his/her left from right.

Spatial awareness allows children to understand their location and the location of objects in relation to their own bodies. Most children naturally develop spatial awareness as they explore the world and engage in play. Parents of a child approaching school age who are concerned about their child’s spatial awareness should consult a GP, educational or childcare expert for further information.

What do Babies Hear?
Share Your Story, Join the Discussion or Seek Advice..
an example of how spatial awareness could be used
sam - 9-Sep-16 @ 8:15 PM
Could spatial awareness disability be the cause for a child that is often unaware of his surroundings? For example a child of the age group 5-9 that often runs into things & people or performs actions (jumping, flipping, etc.) in a place that is not an acceptable place for those actions, such as a crowded room, standing by a young toddler which results in knocking others down or hurting them.I have a nephew, who was adopted 3 yrs from Africa when he was 4 yrs old. He is classified as a "trauma child" due to neglect in the orphanage.He is currently being observed for possibly having learning & developmental disabilitiesand has been diagnosed with anxiety.He performs the above activities including, many others that seems he is unaware of his surroundings &/or does not comprehend what the results of his actions will be due to his actions. His actions often seem to be compulsive &,lack of better words, does not think before he reacts.I have no prior knowledge of spatial awareness & know that his actions could be from a number of common reasons or disorders but would like to know if any of these deacriptions could possible be from spatial disorder? I would very much appreciate any helpful information on this disorder and some other examples that pertain to it. Thank you advance for any information.
lynsiej - 16-Apr-16 @ 8:30 PM
Title:
(never shown)
Firstname:
(never shown)
Surname:
(never shown)
Email:
(never shown)
Nickname:
(shown)
Comment:
Validate: