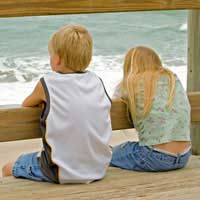 It’s an age old debate: is it nature or nurture that is responsible for some of the developmental differences in girls and boys? That is whether it is genetics or the children’s environments that result in different rates of development along sex lines. While every child will develop differently and as appropriate to them, there are some generalities that can be made regarding the sexes, physical development and developmental milestones such as walking, talking and toilet training.

The rate of physical development will differ for each child and there are truly not any stereotypes that hold true for every child regarding sex differences in physical development. At certain times girls may well be taller and weigh more than boys of a similar age, though usually after puberty boys will grow taller and weigh more than girls. Of course, these are simply generalities and will not always be true.

In general, boys’ motor skills develop more quickly than girls’ and so boys often crawl and walk at an earlier age than girls. Of course “early” is a relative term, particularly in the short lifetime of infants and toddlers. A child that walks even a week earlier than another is said to walk “earlier,” so in reality the sex differences in children’s physical development and therefore crawling and walking are not always dramatic.

In general, girls’ language skills develop more quickly than boys’ and so girls often babble and talk at an earlier age compared to boys. This does not necessarily mean that girls will be able to learn vocabulary faster or string sentences together earlier than boys, but it is a possibility. These skills in particular are a part of cognitive development, but talking at an earlier age than another child does not in any way prove or guarantee greater intellect.

Toilet training involves a number of developmental skills. Not only do children need to be able to physically “hold” urine until they reach a toilet, but they need to understand the sensations that signal a need for a toilet. Emotionally and socially children must be able to understand why adults use a toilet and cognitively they must be able to work through the entire process. While it is hard to say that either sex toilet trains earlier, it is often said that girls are easier to toilet train than boys though obviously this will be different for each individual child.

From the time they are born, children are constantly told which sex they are. Even a comment as innocent as “What a good boy!” reinforces the child’s sex. While this in itself does no harm, sex stereotyping can be insidious and have lasting consequences. Expecting children to conform to certain stereotypes based on their sex will only end in frustration for everyone. Every child, regardless of sex, has talents and weaknesses and making sure that (s)he grows up to be healthy and happy is all that truly matters.

Sex differences in child development do exist in theory, though parents may never experience sex stereotypes with their own children. In reality, each child is a unique individual who will develop as is best for him/her. Each child will have strengths and weaknesses, and will master certain skills in his/her own time. Some children may never truly master particular skills and that’s alright too. Remember, health and happiness are more important than any preconceived notion of how children should develop and when.

What Signs Could Indicate a Physical Development Problem?

How Active Should My Child Be?