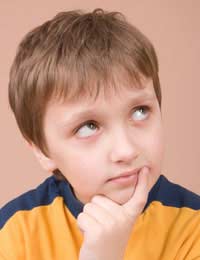 Most parents believe that one of their most important duties is to guide their children to be of sound moral character. Ideally as a child matures and moves into adulthood, they will be able to differentiate good choices from poor ones and right from wrong, without their parents' input.

Lawrence Kohlberg, American psychologist, dedicated a great deal of his career to studying not only how children came to their moral decisions, but also why. He developed an interview process wherein he offered a number of scenarios, each with a moral dilemma and then gauged the answers. His findings were the basis for his belief that the development of moral reasoning happens in a particular sequence, and that each step of the way is a precursor to the next. Kohlberg determined that six stages (in three levels, with two stages each) of moral development existed. He further concluded that not all people are able to reach the highest levels of moral reasoning.

Stage One (punishment and obedience orientation): Morality is as simple as obeying rules because of the negative consequences of disregarding them. Avoiding punishment is most influential.

Stage Two (instrumental relativist orientation): Appropriate behaviour is motivated by what best satisfies a person's needs, or occasionally, the needs of another. Elements of fairness and equality begin to come into play, but there is still self-motivated reasoning involved. Actions evolve from "what will this do for me?" rather than from loyalty, justice, or a sense of fair play.

Stage Three (interpersonal concordance or "good boy-nice girl" orientation): Good behaviour is deemed by the child to be meeting what they believe their parents and teachers expect from them. Striving to be "nice" is the goal.

Stage Five (social-contract legalistic orientation): Appropriate behaviour seems to be based on societal norms, with emphasis on upholding the values of the people. Laws are still deemed important, but the rationale allows for seeking to change laws that seem unjust.

Stage Six (universal ethical-principle orientation): A deep understanding of your own beliefs allows stage six morality to consider not only society's viewpoint, but also the notion that extenuating circumstances can alter moral choices. Basics of morality, such as justice, human dignity, and fairness provide the starting point for decisions, but independent thought and reasoning are major factors in final evaluations.

Helping Kids to Be Morally Sound

While evolving is a lifelong process, especially when it comes to achieving a status of consistently morally admirable behaviour, there are things that parents can do to help their children to learn to make good choices. Providing them with decent adult role models is vital, since kids learn far more by what they see their parents doing than they ever could from listening to a line list of rules. Additionally, offering positive feedback when children are caring, generous, and considerate will help them to know when they are on the right track. Also, parents who make themselves available to their children when the kids have questions or are faced with a dilemma can be very helpful. Parents shouldn't necessarily offer solutions, but should instead ask leading questions to help their child to draw his own conclusions. Finally, encouraging children, especially as they get older, to think through their actions and be brave enough to stand up for what they believe in will help them to know that they have not only a right, but an obligation to be their best selves.