Why Over-Scheduling Children Can Backfire 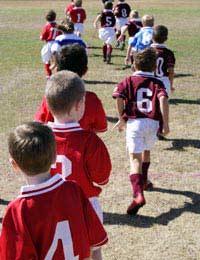 Virtually all parents want their children to do well in life, and for many well-meaning mums and dads, that means exposing them to a variety of activities at an early age – and encouraging them to participate fully in them.

It’s not uncommon for toddlers to take football, gymnastics and art classes, and these days children as young as two years old have been known to start taking music lessons. The idea is the earlier you prepare them to compete in the big bad world, the better they’ll eventually do – and the more successful they’ll become.

But some experts are saying that over-scheduling children – forcing them into a plethora of extra-curricular activities before they even start nursery, and continuing to keep them busy as they get older – can actually do more harm than good.

“The key is to focus on enriching them but not over-scheduling them,” family psychiatrist Dr. Janet Taylor told the Today Show. “We are creating these pressures that cause undue stress and burden, and for kids the benefits can be outweighed by that burden. We don’t want that.”

These days, it’s not unusual for a small child to take violin lessons, football lessons and learn to speak Mandarin – all before he or she starts school. And with many independent schools having ultra-competitive requirements for admission, many parents feel they are letting their children down by not hyper-parenting, micro-managing their lives by forcing them to participate in as many activities as possible.

Indeed, a 2006 Yale University study revealed that children who actively participate in after-school activities get better exam results, are less stressed and are less likely to smoke and drink. It said that only two percent of children in the American study were scheduled to have 20 hours of weekly extra-curricular activities or more, and that most had 10 hours a week or less.

But ten hours a week can mean two hours of after-school activities every weekday, which would leave a child little time to eat, do homework and have a bath, let alone play with friends, watch telly or read a book purely for recreation.

“Kids are growing and they need some time to relax. When they are doing so many activities they might not have time to do their homework, says Josie Knowles, 12, a Year 7 student in north London.

“They also need time to see their friends and have a social life. Relaxing is also important and can help at school, so kids are not so stressed out.”

Supernanny Jo Frost agrees. She believes that extracurricular activities are good for children, anything from learning to play an instrument to sewing to participating in team sports. But she cautions that parents should gauge the type – and number - of activities based on their children’s temperament and maturity level.

“Wondering how many days a week your 2nd grader (Yr 3 child) should be practicing their instrument or your 5th grader (Yr 6 child) running football drills?” she writes in her blog, JoFrost.com.

“Over-scheduling is a problem you and your child will probably face... (but) as always, keep an eye out for signs that he is over-extending himself with after-school commitments. As a general rule, he should be spending fewer than 20 hours a week participating in after-school activities.”

Frost adds that parents should always keep tabs on their children’s schoolwork, and make sure that too many activities on the side are not causing burn-out. In addition, she suggests making time at least once a week for family commitments, so that kids never forget that family should always be a priority.

Activities that Help Others

Children’s activities don’t always have to involve bettering themselves. Sometimes, they can work toward bettering the community in which they live, according to Jo Frost.

As children mature, their activities should include volunteer and charity work, such as helping out older people or helping raise awareness of a social issue they believe in.

“To improve academic performance, encourage your preteen to spend time volunteering...” she says, warning that you should set limits if your child is "often crabby and irritable, if his grades drop, if he has trouble sleeping or complains of mysterious illnesses, or if he shows other signs of stress like over-eating."

As a young teen, Hertfordshire mum of three Denise Carlton volunteered at a local hospital, where she helped in a geriatric ward. “It was an eye-opening experience for me, and definitely changed the way I saw the world,” she recalls.

“I saw patients who were treated well, and those who weren’t treated so well. It taught me a lot about life, and I learned a lot more than I would have had I just joined the chess club or the swimming team.

"It was also a handy thing to put on my application when eventually I applied for university.”

Doing nothing is great for children – and should be a fundamental part of childhood. It helps them wind down, it sparks creativity and independence, and it encourages them to think for themselves.

“Children need downtime to just sort of decompress and recharge their batteries,” says Kelly Sachleben, a mum of two from north London. “When they are over-scheduled there is no time for that and they have no time to think for themselves and fill their own schedules. Then, later in life, they don’t know how to plan things for themselves.”

Parents also over-schedule their children as they don’t know how to schedule activities for them at home apart from watching television and going on the computer. “So often, over-scheduling is a crutch for the parents,” says Kelly. “My son, who’s eight, doesn’t know how to entertain himself if he doesn’t have a screen in front of him. It’s because he always has a set activity planned, or some electronic-based activity to do.”

Kelly adds that one she saw a primary school teacher putting out piles of balls, Hoola-Hoops and other toys out on the school playground, but that few of the children knew what to do with them. “This whole generation doesn’t know how to be creative with their time and with other materials, a result of being over-scheduled at an early age,” she says.

Letting children have time to themselves, instead of forcing them to fill every minutes with a prescribed activity, has benefits such as:

Children learn by imitation, and if you are over-scheduled, chances are your children are as well. While it can be difficult to slow down, take the time to spend more time with your children, and allow them the freedom to just be themselves.

“More than anything, your kids need you. And kids need time to be kids.”

The Benefits of Baby Gym and Soft Play