Language Development in the First Year 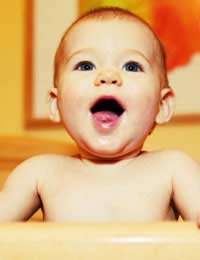 The time between a baby's birth and the celebration of their first birthday is one of enormous growth and development. From helpless newborn to action packed and silly, parents are often amazed at just how much their babies change in that very first year. These changes don't happen overnight, of course, but the developmental milestones that babies reach before they've ever blown out a single birthday candle come so rapidly that parents might swear that their babies grew right before their eyes.

In the beginning, babies express their needs by crying. As they grow, babies begin to try out their voices for more than merely crying, making a series of first sounds that will soon develop into first words. Parents can encourage their baby's vocalisations by talking, reading, and singing. Long before they utter their first words, babies are learning about tone, inflection, and rhythm of speech from listening to the people around them.

Babies, like the rest of us, are unique individuals. As such, no two babies will reach their developmental milestones on exactly the same schedule, so parents should try to avoid excessive worrying or comparing one baby to another. As long as babies are making continual progress, they are probably doing just fine. The following are guidelines that may help parents to anticipate what their little ones might be saying as they progress through that important first year.

Newborns sleep much of the time and when they are awake, they are usually eating or crying. In the beginning, it can be difficult to know exactly what it is that a baby wants, but before long, parents will learn to differentiate their baby's sounds and will likely understand much of what the baby is trying to communicate. Many parents note differences between their baby's "hungry cry" and their "tired cry," making it much easier for them to meet their baby's needs. Vowel sounds are prominent in these first few months, with babies repeating, "eh" and "ah" and "oh."

While infants may not be very verbal yet, they are constantly learning about language from the voices around them. Small babies startle at loud or sudden noises and will turn their heads toward their mother's voice, indicating a preference for hers above others.

Now much more verbal than a few months ago, four to six month old babies enjoy babbling. Single syllable consonant sounds make their way into the vocabularies of babies, paving the way for real words down the road a bit. Some parents note that their babies are beginning to repeat favourite sounds at this stage and if carers mimic the baby's sounds they are sure to be rewarded with a big smile!

With several months of practice behind them, seven to nine month old babies are expert babblers. In fact, some of what they are saying might begin to sound like talking, with stops and starts that mimic sentences. Two syllable sounds make their way into the baby's vocabulary, but even if they are "mama" or "dada," it is unlikely that the baby is associating the sounds with possible meanings.

A baby's understanding of the words he hears has increased dramatically from a few months ago, and it is likely that he understands "no-no," and he probably doesn't like it! Parents should be sure that they talk to their babies throughout the day, using descriptive speech as babies are constantly taking in information.

From the day that their baby is born, parents await that very first word and at some point between ten and twelve months, they just may get to hear it. By the time that they celebrate their first birthdays, many babies can say three or four words and can understand many more. In addition to verbalising, most year old babies will employ the use of simple signs to indicate their wishes. Even if their parents have not taught them any baby sign language, they are likely to wave goodbye, nod their heads, and raise their arms when they'd like to be picked up. The use of simple signs can help babies who are not yet capable of speaking to communicate their needs without frustration.