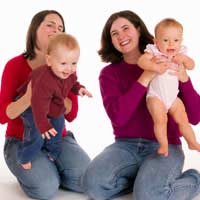 All children are different even young babies. Some seem to be naturally relaxed and smile easily, while others tend to fuss a bit. Parents are often amazed at the differences in personality between their own children, expecting that their second child will be much like the first was.

As babies grow and their opportunity to socialise increases, there will again be distinct differences from child to child. Many children take a while to warm up in a new environment, but some show no signs of anxiety, instead bursting onto a playground, eagerly seeking the attention and companionship of other kids. There are a number of things that parents can do to help their child feel comfortable with others, but care must be taken not to force hesitant children into situations that make them fearful. If parents are patient and allow their children to make social advancements at a relaxed pace, they will usually find that even the meekest children will make their way just fine.

For babies, their first opportunities to socialise and form attachments to other people are typically within their core families. Mum and dad can help to make their baby feel safe and secure by offering plenty of attention, right from the start. Infants get a sense of assurance that the world is a welcoming place when caregivers are quick to provide feedings, dry nappies, and plenty of cuddles and smiles. Talking to babies and interacting with them using pleasant expressions and soothing voices makes them receptive to social interaction. Babies’ smiles should always be rewarded with a big grin in return!

As babies grow into toddlers, many have their first experiences of spending time with other children, typically at a nursery. Social skills such as sharing, taking turns, and approaching others become easier with practice (what doesn't?), so daily interaction with peers can be very beneficial for the social development of growing children. Thoughtful, involved teachers can be of great assistance in helping children to learn how to relate in positive ways, encouraging shy children to take initiative and bolder children to work toward gentle interaction. Parents can help by providing their youngsters with a variety of opportunities to socialise, both within the extended family and in the outside world.

As children move from nursery school to primary school, they are often becoming increasingly self-confident and able to manoeuvre well in social interactions. No longer completely self-focused, friendships become an important part of their lives. School-aged kids are able to understand not only their own needs and desires, but are often compassionate toward their peer group. Issues of fairness and equality become important to children as they learn to care for people who are not part of their families. Loyalty and reliability increase, and children take pride in being considered responsible and kind by both their teachers and their peers.

Teenagers' lives are often socially centred, which can sometimes be a cause of concern for parents. During adolescence, friendships are so vital to happiness that other priorities can sometimes take a back seat. The enjoyment that kids take in school, part-time jobs, and even extra-curricular activities often stems from the fact that they get to do these things with their friends.

In addition to taking great pleasure from socialisation, teens also are mature enough, socially, to understand that with friendship comes responsibility. Teenagers are often fiercely loyal to their peers, standing up for each other and taking a strong, unified stance on issues that they find important. These characteristics are indicative of a maturity that will take them well into their adult years. True social development is about more than merely enjoying the company of others and doing well in group situations. It is about having a strong sense of community and being capable of behaving in a manner that is beneficial to not only the people that you know, but also to society as a whole.