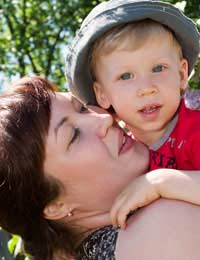 Parents are often surprised to discover that their children's personalities vary considerably from sibling to sibling. It's interesting to think that children with the same genetic background who live in the same house can be so vastly different from one another but that is often the case. A number of factors come together to determine personality, many of which are present in even young babies.

Experienced parents will tell you that some of the personality traits that they see in their older children were already well underway when those children were infants. Some babies seem relaxed and easygoing, right from the start, while others fuss and cry a lot, seeming tense. Parents must exercise caution when tempted to label their babies, though, since those tags can sometimes stick and may influence the further development of their children's personalities. For instance, if parents refer to one of the young children as the "friendly one" and another as the "shy one," it won't take too long before those children begin to see themselves in the ways that their parents describe, limiting their potential for the full development of their natural personalities to develop.

Erik Erikson studied the development of personality and felt that from infancy, all people go through a set series of stages, each helping to determine personality type and ability to function well and live happy, productive lives. For the first year of life, Erikson stressed the importance of giving babies a sense of safety and security, feeling that unless caregivers instill this early, babies will grow up with an inner sense that the world is a place to be feared, contributing to feelings of anxiety and insecurity.

What Parents Can Do

Depending on some of the characteristics that parents see in their babies, they may choose to guide the baby toward a middle ground, hoping that their children will not lean toward personality extremes. A few of the most common factors to consider are:

Intensity: Some babies show intense reactions to light, noise, and temperature changes, while others seem unaffected. Parents of ultra-calm babies may wish to play energising music and encourage physical activity while babies who are especially responsive to stimuli may benefit from an environment of soothing sounds and lighting conditions.

Frustration Level: While some babies seem willing to try a new skill repeatedly until they master it, others may become easily frustrated, displaying bursts of temper when they have difficulty. For a baby who has a hard time when things don't go their way, parents may try to redirect the child toward a different toy or activity, going back to the first once the baby is calmer. A baby who is happy to stay on task will benefit from simple, playful interaction on the part of caregivers.

Anxiety Response: Some babies are more sensitive than others to changes in environment or the transfer of caregivers. Babies who are experiencing difficult separation anxiety should be cuddled and reassured. Sometimes allowing an anxious baby to hold a favourite stuffed animal or blanket can ease their fears. Parents of babies who seemingly adapt to all changes without complaint need only to make sure that their babies are exposed to sufficient stimuli (and they should count their blessings!).

Social Ability: Some babies naturally welcome social interaction while others appear shy, even at an early age. Parents of socially cautious babies need to expose them to an assortment of people and situations, but should be sensitive and allow their babies to explore at their own pace, and with the assurance that parents are right nearby. Outgoing babies should be encouraged to play with others, while allowing some time for imaginative, solo playtime.

While opinions vary widely on the effect that birth order has on personality, many people believe that a child's place in their family helps to shape who they will be. The following are generalisations, of course, but are something to consider.

Only Children: Because of the undivided attention that they receive from their parents, only children are said to be very confident, dependable and able to take on responsibility with ease. They may also have a tendency to be demanding and sensitive, though.

First Born Children: Often interested in leadership roles, first-borns frequently grew up with feelings of "being in charge" and tend to retain that sense throughout their lives. Because they feel that they are usually right, they may have difficulty taking no for an answer.

Middle Children: Blessed (or cursed!) with both older and younger siblings, middle-born children tend to be peacemakers, good listeners, and classic people-pleasers. While these abilities can make them very easy to get along with, middle-borns may have to work at standing up for themselves or making unpopular decisions.

Last Born Children: The baby of the family, usually lavished with attention from parents and older siblings, often develops an outgoing, extroverted personality. Last-borns tend to be fun-loving and make friends easily, but sometimes, their tendency to need attention can be difficult for the others in their lives. They may also get bored easily and expect that life should always be fun.

Understanding Babies' Emotions
Share Your Story, Join the Discussion or Seek Advice..
So is this all personality development during infancy??in other words i have that hearding on my assignment so should i just copy all this things and edit??i mean the whole like this one of temperature???help plz
Tapiya - 9-Mar-19 @ 11:59 AM
It is very nicely written and also very easy to understand.....:) :)Thanks to whoever has written this article....i have learned all the aspects of baby's personality development very easily...:) :)
kru - 22-Aug-12 @ 5:30 PM
Title:
(never shown)
Firstname:
(never shown)
Surname:
(never shown)
Email:
(never shown)
Nickname:
(shown)
Comment:
Validate: