Speech and Language Delay in Children 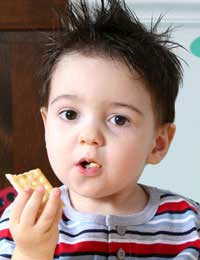 While all children reach developmental milestones on their own schedules, there are times when a child seems to lag far enough behind the norms to warrant a thorough evaluation. Delays in speech and language are fairly common amongst young children, but with early intervention, children can work with a speech-language pathologist to help them to reach their highest potential.

Children are not expected to develop on a rigid schedule, but there are signs that can indicate possible problems. Loose guidelines exist so that parents can judge how their child is doing, allowing them to make educated assessments as to their child's developmental progress. Often, parents have the very best instincts about their own children and are able to recognise possible concerns even before a paediatrician or other health professional would, making parents a child's best ally in seeking assistance when necessary.

The following are considered normal expectations for children at various ages. Parents are urged to keep in mind that reaching developmental milestones a little ahead or behind the specified ages is perfectly normal.

The First 12 Months
During their first few months, infants should respond to sound, startling at sudden noises. Additionally, they should turn toward familiar voices and within a few months, should begin to coo a bit in response to verbal cues. By about 9 months, babies will likely be stringing short sounds together, without giving the "words" any particular meaning. They may say "mama" or "dada," but at that age, they are not actually associating the words with their parents (although it's still fun to hear them say it!). By a year, however, parents may have been rewarded by their little one's very first "real word."

12 to 18 Months
By now, babies should have a small vocabulary of one or two real words and should be using some nonverbal means of communication, such as waving and clapping. Additionally, 15 month old children should be able to understand and follow simple instructions ("Please give me your cup.") As they reach the eighteen month mark, children's vocabularies should be about 20 words.

18 to 24 Months
The span from 18 months to the second birthday should be one of impressive speech and language growth. By 24 months, children usually have a vocabulary of about 50 words at their disposal and are able to form simple two-word phrases such as "me eat" or "no sleepy." Their comprehension and ability to follow direction should be improving, too, with 2 year olds being able to understand two-step instructions ("Please get your shoes and put them on the mat.")

Two to Three Years
The year between a child's second and third birthdays is an important one from a speech and language standpoint. They seem to learn new words daily, increasing their vocabularies to beyond what their parents can keep track of. In addition to routinely speaking in simple sentences, children should begin to identify colours and shapes by their third birthdays.

The Distinction Between Speech and Language

While many people use the terms "speech" and "language" interchangeably, they actually have different meanings. Speech is specific to verbal communication and refers to the forming of words, while language is a broader term, encompassing verbal, nonverbal, and written communication. Delays in speech are what most often alert parents that their child is experiencing difficulty, while other language delays, such as when a child is able to verbalise well but has trouble following direction, may be mis-categorised as behavioural, rather than language issues. When assessing a child's overall mastery of speech and language, it is vital to consider not only their speaking ability, but also their listening and direction taking capabilities.

While there are many possible causes for speech and language delays, there are a few things worth noting. Sometimes, oral-motor problems are to blame for delays, meaning that the areas of the brain responsible for speech do not communicate sufficiently with the lips, tongue and jaw to allow clear speaking. Often, when this is the cause, the child will show other delays as well.

Difficulty in hearing is commonly responsible for delays in speech, making it difficult for children to understand, imitate and form accurate sounds. From simple ear infections to more complicated causes, difficulty hearing can impact a child's language development. If parents have concerns about their children's ability to hear well, they should consult a clinical audiologist.

Games That Help Encourage Language and Literacy
Share Your Story, Join the Discussion or Seek Advice..
[Add a Comment]
@20112011 - I think it sums it up in the article that while children do develop at their own speeds, often, parents have the very best instincts about their own children and are able to recognise possible concerns even before a paediatrician or other health professional would, making parents a child's best ally in seeking assistance when necessary. Given you have already been to visit your GP, then you can only really wait until your appointment is confirmed. If you do not feel you wish to wait then you could book an appointment privately, if just to put your mind at rest. It may be something as simple as that your daughter has a quieter personality than your elder child. If your elder child is more verbally communicative, then occasionally the second child feels they do not have to vocalise as much.
KidsDevelopment - 31-Jul-15 @ 2:33 PM
Hello I'm not really one to write on these comment things however not really sure whether to be worried or ride it out with my second child. my first was very advanced able to count to 20, use simple sentences, abc's and much more by 20 months. My second doesn't say anywhere near as much. Mum. Dad, garden, quack quack and no (really good at this one) which she has been saying for a good few months and has developed a few new words these last 2 weeks up, carcar, an (whilst pointing at a van) bubble and duck. She mumbles a lot as though chatting away. All other aspects of development are very good. She could climb up and downstairs before she could walk at a year, she used a spoon and fork unaided since 10/11 months, she understands two part instructions but chooses when to act on them and is currently potty trainning at home... She has said a few words previously which she now doesn't use anymore even though I try to encourage them. I am at stay at home mum which talks to her children as much as possible. Currently feeling a bit of a failure.. Have spoken to the doctor 2 months ago (at 18 months) who said he would refer me to community paediatric health visitor but have not heard from them yet....what do I do??
20112011 - 30-Jul-15 @ 11:58 PM
Hi I am setting up a music movement and listening group for children with hearing impairment to help them develop their listening and language skills (for children under 5). I have lots of support on this from the National Deaf Childrens Society, our local deaf club and my local teacher of the deaf. However, I have been approached by a number of parents who's children do not have any hearing impairment but do have S&L difficulties, particularly delayed speech. Can you recommend any organisations I should get in touch with to help me support these children?
Em - 9-Jul-15 @ 10:04 PM
@Megacotts - As specified in the article, at 24 months, children usually have a vocabulary of about 50 words at their disposal and are able to form simple two-word phrases such as "me eat" or "no sleepy." Their comprehension and ability to follow direction should be improving, too, with two year olds being able to understand two-step instructions i.e 'please get your shoes and put them on the mat.' I think if you are worried a trip to your GP wont harm. But I'm sure he will be fine, children develop at different times and six months behind seems no big issue.
KidsDevelopment - 25-Mar-15 @ 11:01 AM
My son is 26 months but seems to be about 6 months behind with his speech. He can understand well enough, but he does not pronounce words correctly, and in some cases makes up his own version of words. Should I be concerned? And if so what should I do?
Megacotts - 22-Mar-15 @ 9:17 AM
my son is 4 and half years old, he is now studying in KG-1, I see that he could not talk property, he say like pa pa pa pa pa"papa", due to his stuttering problem I treated him like homeyopadic and Allopathic medicine, but no fruitful result till today. I do not know what I am doing. kindly some tips for the said reason.
Bapi Debnath - 30-Jul-14 @ 7:17 PM
Title:
(never shown)
Firstname:
(never shown)
Surname:
(never shown)
Email:
(never shown)
Nickname:
(shown)
Comment:
Validate: