Language Development in the Fourth and Fifth Year 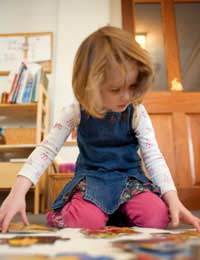 No longer babies, the speech and language development of children in their fourth and fifth years is quite impressive. As their fourth year begins, children are speaking in full and somewhat correct sentences and are able to speak with a clarity that even strangers can usually understand. Over the next two years, though, children develop the ability to understand the complexities of language rules, making grammatical errors with less frequency. By the time that they are five, most kids are able to hold engaging conversations about events in their lives, happily relaying information about a family holiday or favoured activity.

Sentences of four or more words are commonplace by the end of this stage, with kids talking excitedly about their classmates and preschool activities. By 36 months, kids have a working vocabulary of about 1000 words, which will be even greater as the year progresses. Three to four year olds should be able to use plurals and past tense words in a mostly correct fashion, allowing for mistakes in cases of language rule exceptions. They should also be able to understand and carry out three step instructions ("Please take off your jacket, put it in your cubby, and take your place on the mat.") without difficulty.

Oftentimes, difficulties in speech, if they are going to appear, crop up during this period. Stammering may become evident and requires a consultation with a speech-language pathologist. While some children outgrow stammering on their own, it's best to seek advice since consistent stammering can limit a child's further language development as well as having a negative impact on their social development. Hearing difficulties may also become evident at this age. If a child seems to have difficulty listening and following directions, it may indicate hearing loss. An appointment with a clinical audiologist is in order to rule out any type of hearing impairment.

By their fourth birthdays, children are able to understand not only an enormous quantity of words, but can apply them to real world situations. They should be able to make comparisons between objects (taller/shorter, lighter/darker) and they often take pride in their ability to carry out instructions without reminders. As they approach their fifth birthdays, children can not only make comparisons, but may be able to provide the word that means the opposite of a given word. They should also have a growing understanding of the concept of time, correctly identifying yesterday vs. tomorrow, for example.

Socially, four to five year old children are blossoming, taking a great deal of pleasure from school friendships. They may also be inclined to act out a bit in order to get the attention of strangers, or may merely try to engage them in conversations when the family is shopping or running errands. Their inclination to socialise should be encouraged, as long as the children understand that it is only safe and acceptable to talk to strangers when they are with a trusted adult, such as Mum or Dad.

The time between a child's third birthday and their fifth affords great advancements in language as well as social development. Often, the two go hand-in-hand, with increased comfort in socialising stemming from a growing confidence in their ability to communicate clearly. The differences between a just-turned three year old and a just-turned five year old can be understood by comparing how they would choose to describe the exact same day: