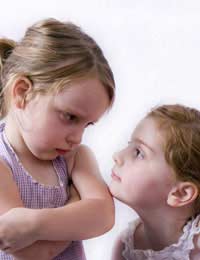 Sibling rivalry is a concern for any parent of more than one child. Even if your children are usually the best of friends there will always be the risk that at times they will show jealousy of, begin to compete with or outright fight each other. Unfortunately these bouts of sibling rivalry will likely occur regardless of how hard you try to avoid them. Understanding sibling rivalry, taking steps to minimise it and working towards resolving sibling rivalry should help keep the peace in your household, but beware that sibling rivalry could still strike at any time so try to be ready to deal with it when it does.

Sibling rivalry can be long-standing and consistent, or it can rear its head only during certain times, activities or events. Very often the competition and fighting that defines sibling rivalry will occur when:

Though it may not always seem like it, there are steps that parents can take to avoid frequent bouts of sibling rivalry. Parents can:

Even with all of the steps that parents can take to avoid sibling rivalry, conflicts are still bound to occur. When they do, there are several ways that parents can help resolve them in a timely manner. For example, parents can:Sibling rivalry is unpleasant for most parents to witness, and indeed for most children to engage in. Unfortunately, this does not stop it from occurring in most households where there is more than one child. Rather than hope that it will resolve itself, parents should tackle sibling rivalry head on by learning the causes, taking steps to avoid it and learning how to resolve it when it does occur. A happier, healthier household will be the family’s reward.

A Child's Relationship With Their Mother
Share Your Story, Join the Discussion or Seek Advice..
I have two kids, 6 and 2, both of them seem to have a very strange attachement to me, they smell my skin and as they do it they suck on their tongues as if they are feeding. Should I be worried? I thought this might end soon especially for the five year old.
Pat - 3-Apr-19 @ 7:03 PM
Title:
(never shown)
Firstname:
(never shown)
Surname:
(never shown)
Email:
(never shown)
Nickname:
(shown)
Comment:
Validate: